The service was led by Daniel Park. Jinung Son of Manna Church in Vancouver led the prayer, and Yuin Kim of Direction Church in Vancouver read the Bible. Afterwards, Dae-Ho Kim and his wife Hye-Jeong Park, missionaries at the Jesus Love Church in Vancouver, gave a special song. David Horita, the Director of Fellowship Pacific, preached a sermon under the title of, “Go forward by faith.” 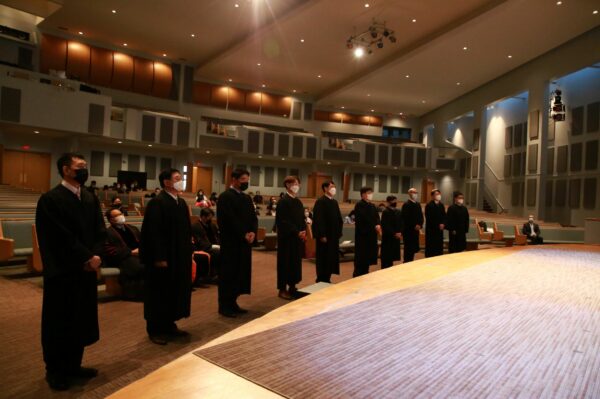 The third part of the ceremony involved exhortations and congratulatory speeches. After conferring the certificates of ordination to the new pastors, Larry Perkins, President Emeritus of Northwest Seminary, exhorted them from 1 Thessalonians 1:6., Todd Chapman of Fellowship Pacific and Archie Spencer of Northwest Seminary gave congratulatory remarks, and Eui-Jong Kim of Abbotsford Korean Church gave an encouraging speech. After that, confirmed ordination candidate Suk-ho Lee, pastor of Sam Hill Community Church, commented that they gave all glory and thanks to God and asked for prayer for those ordained. The ceremony was concluded with a benediction given by Soo-jun Park, the former chaplain of Chongshin University Korea.